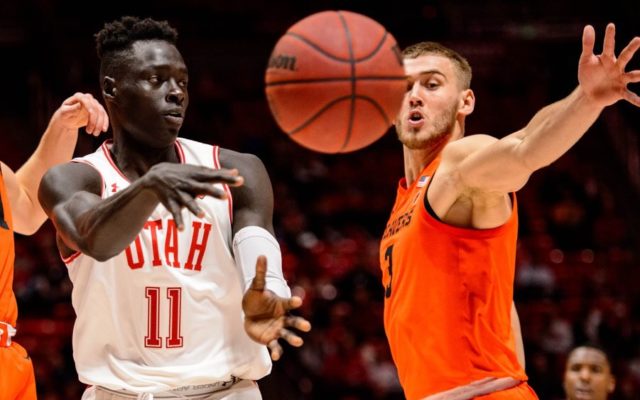 Both Gach, a 6-6 sophomore guard with the University of Utah Utes who helped to lead the Austin Packers boys’ basketball team to a 29-3 record in the 2016-2017 season that cumluated with a runner-up finish in the State Class AAA boys’ basketball tournament has declared for the 2020 NBA draft.

Gach will maintain his eligibility if he decides now isn’t the right time to turn pro as he will not hire an agent.  Since 2016, the NCAA has allowed college athletes to declare for the draft, attend the NBA Combine in May and then withdraw no more than 10 days after the combine to maintain their college eligibility.  Gach made his decision after averaging 10.7 points, 3.6 rebounds and 2.9 assists with the Utes this past season. He was named Pac-12 Player of the Week at the end of the regular season after scoring a career-high 28, hitting an overtime-forcing basket and then sinking three straight free throws with 0.6 left in a win over Colorado.  Gach also tallied a triple-double on November 8th, 2019 against Mississippi Valley State with 12 points, 10 rebounds and 10 assists.

Gach helped to lead Austin to a 20-2 record in the Big 9 Conference in his last season with the Packers in 2016-2017 and a Section 1AAA championship with wins over Albert Lea, Byron and Northfield.  Austin downed St. Thomas Academy in the State Class AAA quarterfinals 55-49, and they then defeated Marshall 73-53 before falling to DeLaSalle in the finals 72-44.  Gach, who was ranked as a four-star wing played his senior year at Arizona Compass in Phoenix, Arizona where he tallied 24 points, eight rebounds and seven assists per game and helped to lead the squad to a 24-4 season record.