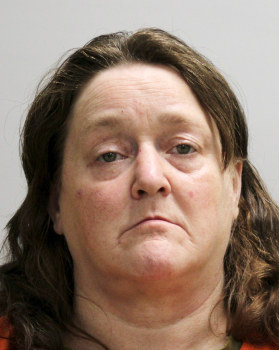 A rural Austin woman was taken into custody late Thursday morning after the truck she was driving crashed into a transformer on 4th St. NW and caused a significant power outage in that portion of the city.

Austin Police officers were dispatched to the 1800 block of 4th St. NW at 10:02 a.m. Thursday morning for a report of a vehicle that had struck a utility transformer, and had then fled north on 4th St.  Officers were advised that the vehicle involved in the incident was a red Chevrolet truck with Minnesota license plates, and Austin Police Captain Todd Clennon reported that officers then traveled north on U.S. Highway 218 to try to intercept the vehicle.  They were advised by a citizen who was following the suspect vehicle that it had pulled into an address on 255th St., and Captain Clennon stated  that contact was made shortly thereafter with the vehicle and the driver, 51-year old April Dahmen.  Authorities stated  that Dahmen appeared to be under the influence of a controlled substance, and Dahmen told authorities that she had been driving north on 4th St. NW from Mona, Iowa when she struck the transformer.

Clennon stated that Dahmen was arrested by Mower County Sheriff’s Office deputies on a charge of DWI, operating a motor vehicle while under the influence of a controlled substance and was booked into the Mower County jail.