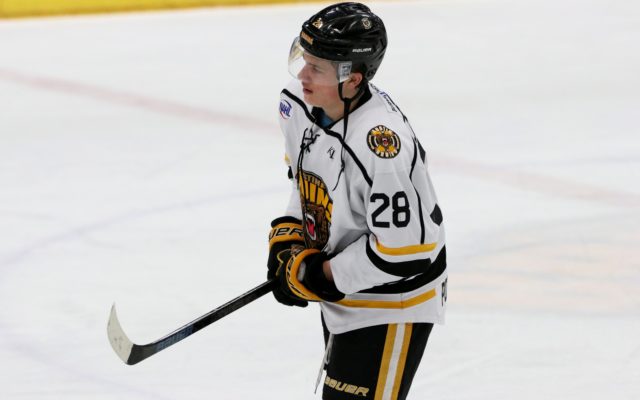 The Austin Bruins opened up for five goals against Aberdeen on Saturday night, earning the victory 5-2.

Coming into Saturday night’s game, Aberdeen was 17-0-0-0 when scoring first, making the first goal of the game all the more important. Midway through a back-and-forth period, the Bruins struck first when Hugh Larking scored his 18th goal of the season giving the Bruins a 1-0 lead. The Bruins held onto the momentum following their first goal for quite some time, but while on the power-play at the end of the first, a blocked shot turned into a short-handed breakaway chance for Mack Byers who beat Bruins goalie Brett Miller over the shoulder to even things at one goal apiece.

In the second, Austin made sure to keep the pressure on the Wings. Nearing the ten-minute mark of the frame, Peter Jacobs sprung free in the offensive-zone and went top-shelf over Aberdeen netminder Jake Sibell and earned the Bruins their one-goal lead back, 2-1. For the second time on the night, Aberdeen managed to even the score with a shorthanded goal. Also for the second time on the night, it was Mack Byers. Playing the forecheck, Byers stripped a Bruins defenseman of the puck below the goal-line, walked out front and put a backhander up and over Miller’s shoulder. The Bruins couldn’t manage to capitalize on the rest of the power-play, but on their next opportunity they wasted no time. Thanks to an offensive-zone face-off win, the Bruins crisp passing, and a perfectfully placed Hugh Quinn shot in the top-corner, Austin retook the lead 3-2.

After heading into the locker room after two periods with the lead, the Bruins didn’t look back. One night after being the recipient of a heavy collision causing an Aberdeen Wing to be ejected, Barrett Brooks enacted his revenge in the prettiest way possible. The forward squeaked out from behind the goal-line and went between the legs and top-shelf increasing Austin’s lead to 4-2. Just for good measure, Hugh Larkin netted his second goal of the night in the final 12 minutes of the third period, a goal in which he walked through the slot and slid the puck through Sibell, sealing the game for the Bruins, 5-2.

All said and done, Brett Miller turned aside 28 of 30 Aberdeen shots while Wings’ goalie Jake Sibell was good on 22 of 27.

With the win, the Bruins increased their record to 25-15-2-5 on the season and pulled even with the Minot Minotauros for third place in the NAHL Central division. After the loss, Aberdeen slipped to 32-9-4-2. The victory also put a stop the Bruins three-game losing streak while also ending the Wings five-game winning streak. In total, the Bruins managed to get three out of four possible standings points on the weekend.

Up next for the Bruins, they welcome the Bismarck Bobcats to town for a pair of games on Friday, February 28 and Saturday, February 29. Tickets for this crucial playoff-style matchup go on sale Monday, February 24 at all the Bruins vendors including Games People Play, – Hy-Vee, Holiday Inn, and Jim’s Marketplace.