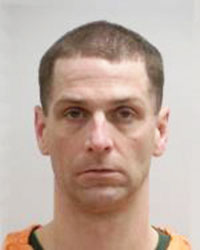 A search for a wanted man from Albert Lea who fled from authorities from Minnesota into Iowa resulted in an arrest on Monday.

The Mitchell County Sheriff’s Office reported that a traffic pursuit began in Mower County and continued into north Iowa.

Authorities stated that 36-year old Weston William Zuehl crashed his truck near Carpenter and fled on foot. He was eventually apprehended and is facing multiple charges.

Zuehl has a history of fleeing authorities, as he was sentenced in March to three years of supervised probation and 80 hours of community work service in Freeborn County District Court after pleading guilty to two counts of fleeing a peace officer for an August 2018 vehicle pursuit in southern Minnesota that nearly caused several crashes.

Charges of eluding and possession of marijuana are still pending against Zuehl in North Iowa. He was arrested in 2017 after a high-speed chase that began in Lake Mills. No trial date has been set at last word.