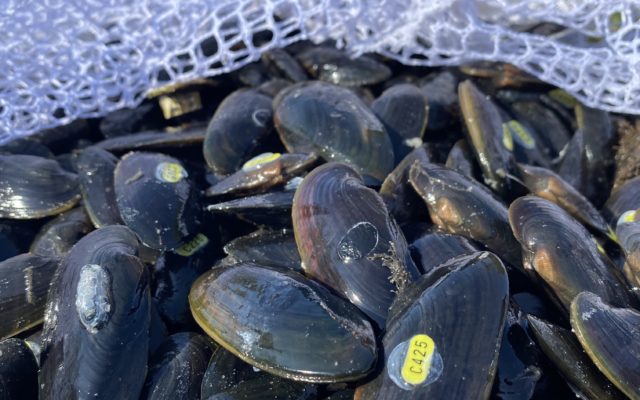 A year ago, about 1,500 native mussels were placed in Minnesota’s Cedar River.

On Tuesday, more than double that number of native mussels joined them at three locations in what is hopefully the start of their revitalization along 21 river miles of the Cedar River along with its tributary streams. This stretch of river runs from Austin’s downtown dam to the next dam just across the border in Otranto, Iowa. 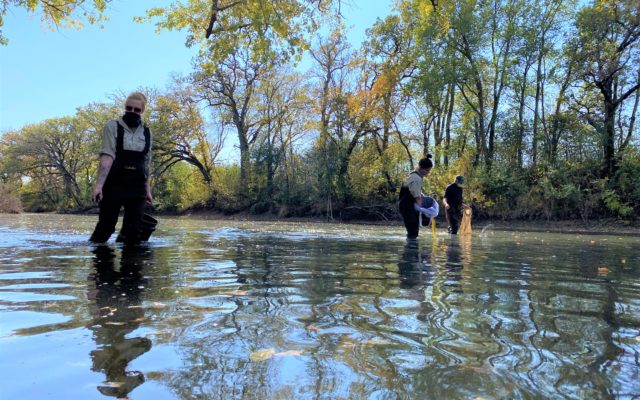 Mussels biologists from the Minnesota Department of Natural Resources joined by a colleague from the Minnesota Zoo placed 3,730 black sandshell mussels in the Cedar River State Water Trail in roughly equal amounts at each site in Mower County’s Austin and Lyle townships. The sites offer a diversity of habitats for researchers to study where mussels survive best.

Madeline Pletta, a DNR mussels propagation biologist leads the mussels project started in 2016 in the Cedar River watershed – one of three chosen for this work in Minnesota by the DNR’s Center for Aquatic Mollusk Programs (CAMP) located along the Mississippi River in Lake City.

Mussels serve as filters in the river to support water quality, provide microhabitats for smaller aquatic creatures like invertebrates and stabilize the river bottom. DNR surveys, however, show the Cedar and other rivers in Minnesota’s southern one-third no longer support their historical assemblages of mussel species.

This was the DNR team’s second transplant in the Cedar River of black sandshells from Austin’s East Side Lake, where they had been growing in underwater, plastic totes that have holes to allow in water and nutrients. The first was in July 2019 with 1,500 black sandshells at the same three sites. Overall, the Cedar now has about 5,230 newly added mussels.

Minnesota Zoo mussels biologist and Austin native Ben Minerich provided 1,103 mussels on Tuesday, with the rest coming from the DNR’s totes in East Side Lake.

DNR will monitor the mussels in the Cedar to see if they are reproducing, creating new populations and thriving overall in the river, Pletta said. Staff tagged the mussels, including some with a special tracking tag to help find them later.

Overall, the DNR hopes to restore seven species of mussels in the Cedar River, Pletta said, which means they expect to use East Side Lake for many more years. The lake now hosts 3,726 native mussels of four types: 1,504 black sandshells; 1,578 muckets; 635 threeridges; and nine spikes.

Depending on the mussels’ growth in East Side Lake, Pletta said, the DNR anticipates most of them to be released in 2021 in the Cedar River, with the others released in 2022.

In total, the DNR has 5,088 juvenile mussels (1-year-old mussels) from the Cedar River Watershed in secondary systems, including 3,726 in East Side Lake and another 1,362 juvenile mussels at the Minnesota Zoo and the DNR’s fisheries facility in Waterville, Pletta said.

Restrictions from the Covid-19 pandemic prevented the DNR from propagating mussels this year, affecting the program.

Austin was known in the 1890s and early 1900s as “Pearl City” for its abundance of freshwater mussels but they became over-harvested by people for making buttons and jewelry, especially for the rare pearls found in some. Pollution in the Cedar and its tributaries long ago also factored into the decline of local mussel populations. Black sandshells, for example, only had been found in recent years as dead shells in the Cedar River in Minnesota and its streams.