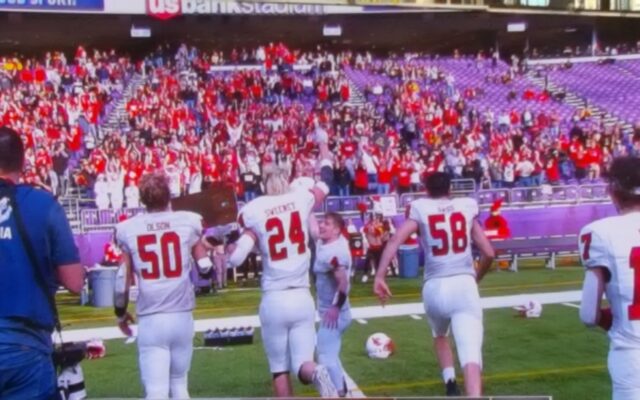 Both the 11-2 LeRoy/Ostrander Cardinals and the 13-0 Fertile/Beltrami Falcons were looking for their first-ever state football titles in the Class 9-Man final in Prep Bowl 39 at US Bank Stadium Saturday, and, as they did in a 49-0 shutout of Kittson County Central in the semi-finals, the Cardinals took control from the very start as they put together a nearly flawless performance that gave them a resounding 58-8 win.

LeRoy/Ostrander, who was making its 13th appearance in the state football tournament and their third appearance in the Prep Bowl after finishing runner-up in 1993 and 1995 took command from the get-go as the Cardinal defense forced a three-and-out on the first Fertile/Beltrami possesssion and took over at the Falcon 39-yard line after a 19-yard punt return by junior Layne Bird.  On the fourth play of the drive, senior quarterback Chase Johnson lofted a perfect pass down the left side and found junior wide receiver Tristan Lewison for a 29-yard touchdown and a 7-0 Cardinal lead after Gavin Sweeney’s extra point.

LeRoy/Ostrander forced another three-and-out on the next Fertile/Beltrami drive and took over at their own 43 after a punt.  On the second play of the drive, Johnson took off around right end on a quarterback keeper, sprinted down the sideline, cut back against the grain across the field, and then angled back to his right as he seemingly ran through the entire Falcon defense for a 54-yard touchdown and a 14-0 lead.

Fertile/Beltrami answered back on their next drive, however, as starting from their own 35, the Falcons drove the ball inside the Cardinal 30 yard line.  On the eleventh play of the drive, quarterback Rylin Petry tried to connect with tight end Ryan Van Den Einde on a middle screen, but Cardinal defensive end Tanner Olson made a leaping interception to stop the drive and gave the ball to the offense at the LeRoy/Ostrander 31-yard line.

The Cardinals cashed in on the turnover as heading back the other way, Johnson rolled to his right on the fifth play of the drive and let fly with a perfect pass on the move to Lewison, who hauled in his second touchdown pass of the game, this one from 38 yards to give LeRoy/Ostrander a 21-0 in the second quarter lead after Sweeney’s extra point.

The Falcons put the ball in play from their own 29 on the ensuing drive, but on the third play, disaster struck again as Petry fired a pass while rolling to his right to running back Everett Balstad, Fertile/Beltrami’s best offensive player with over 1,700 yards rushing and 30 touchdowns, plus narly 500 receiving yards and another eight touchdowns.  The pass went off the hands of Balstad and into the hands of Tristan Lewison, who dashed back to the Falcon 31-yard line.  Johnson broke off a 26-yard run to put the ball inside the 5-yard line, and on the fourth play of the drive, Tanner Olson, who was moved from offensive line to running back during the last game of the regular season barged into the end zone from 1 yard out to give the Cardinals a commanding 28-0 lead.

A 34-yard kickoff return by Fertile/Beltrami’s Brayden Werpy gave the Falcons the ball at the LeRoy/Ostrander 47-yard line to start their next drive, and they were again able to move the ball down the field inside the Cardinal 30.  A run around left end by running back Isaiah Wright seemingly gave the Falcons 1st and goal inside the 1-yard line, but the play was called back on an illegal block in the back, the only penalty of the game called on Fertile/Beltrami that made it instead 1st and 19 back to the 30-yard line.  The Cardinal defense dug in from there and forced a turnover on downs, giving LeRoy/Ostrander the ball back at their own 31.

The Cardinal offense again took the baton from the defense and runs of 16 and 17 yards by Olson helped the Cardinals to a 1st and goal at the Falcon 10-yard line.  A holding penalty pushed LeRoy/Ostrander back to the 20, but a 10-yard run on 2nd and goal by Johnson put the ball back at the 10, and on 3rd and goal, Johnson was able to evade a would-be sacker, stepped up and fired a touchdown pass to tight end Gavin Sweeney in the back of the end zone for a 34-0 lead after the try for 2 points was no good.

Starting their next drive from their own 40, Fertile/Beltrami put together a 10-play touchdown drive, capped off by a 1-yard touchdown run by Balstad to cut the Cardinal lead to 34-8, but the little bit of momentum for the Falcons proved fleeting as taking over from their own 40 with :58 seconds left in the first half and one timeout, Johnson rolled to his right on the second play of the drive and let fly with a bomb down the center of the field that found wide receiver Layne Bird somehow behind the Falcon defense in stride for a crushing 55-yard touchdown and a 41-8 Cardinal lead at the half.

LeRoy/Ostrander got the ball to start the second half and did not relent one bit, as they drove 69 yards in 11 plays and took 5:35 off the third quarter clock on a touchdown drive capped off by Olson rumbling into the end zone from 3 yards out and a 48-8 Cardinal lead.  After a Fertile/Beltrami fumble on their first drive of the half, Olson capped off a seven play, 69-yard touchdown drive with his third touchdown run of the game, this one from 36 yards to give the Cardinals a 55-8 lead.  Gavin Sweeney added a 23-yard field goal for the only score of the 4th quarter and the resounding 58-8 final tally.

In a season full of spectacular performances, Chase Johnson saved maybe his best for last as he carried the ball 18 times for 272 yards and a touchdown, plus he was 5-7 passing for 140 yards and four touchdowns, and his 412 combined yards broke the Prep Bowl record for most total yards by one player in a final.  Tanner Olson toted the ball 18 times for 116 yard and the three touchdowns, while Tristan Lewison caught two passes for 67 yards and two touchdowns, Layne Bird had two catches for 63 yards and a touchdown, and Gavin Sweeney hauled in one pass for 10 yards and a touchdown.  The Cardinals rolled up 557 yards of total offense to 214 for Fertile/Beltrami, and they outscored their last two playoff opponents by a total of 107-8.  The 58 points for the Cardinals also broke a record for the most points scored by one team in a 9-Man final, eclipsing the 57 points scored by Deer Creek in 1976.

The Cardinals finish their championship season with a final record of 12-2.