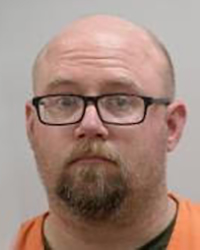 A LeRoy man who was found to be in possession of more than 100 grams of methamphetamine after a search warrant was conducted at his residence has been sentenced to prison time in Mower County District Court.

41-year old Levi Dwayne Guy pleaded guilty to a felony charge of 1st degree drug possession. He was arrested in April 2019 after law enforcement searched his residence in the 100 block of W. Read Street. The Mower County Sheriff’s Office reported that they found 155.04 grams of methamphetamine, drug paraphernalia, a surveillance camera system, a .38 caliber revolver, a 20-gauge shotgun, a .22 caliber rifle, and plastic bags containing small amounts of marijuana, methamphetamine, and hallucinogenic mushrooms.

Guy was sentenced Monday to five years and five months in prison, with credit for five days already served.

As part of a plea agreement in the case, three misdemeanor charges of possession of a firearm as a drug user were dismissed.