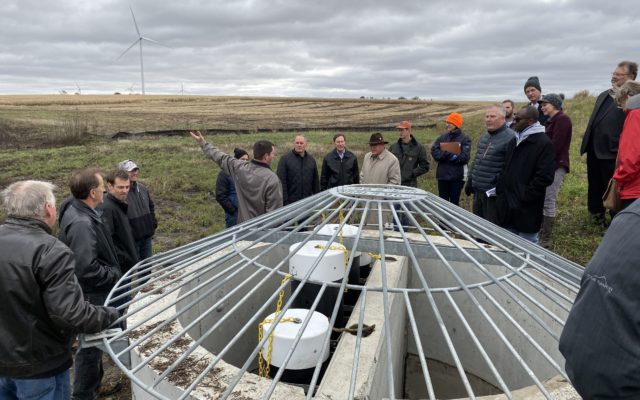 Mower County’s Cedar River Watershed is getting another big dose of generosity from The Hormel Foundation to improve water quality and reduce flooding.

The Hormel Foundation has approved a $500,000 grant request from the Cedar River Watershed District, which, in turn, will match that with $500,000 in mostly state funds.

Most of the match funds will come from the bonding bill passed in October by the state Legislature under the Minnesota Department of Natural Resources’ flood-hazard mitigation program.

In 2015, The Hormel Foundation granted $3.2 million to CRWD to begin its five-year Capital Improvement Plan (CIP) to build upland-storage projects mainly in the watershed’s headwater areas. CRWD matched that grant with $3.4 million in state and local funding.

With a $1 million overall budget heading into the 2021 construction season, CRWD staff now can work with landowners in the headwaters of Dobbins Creek on potential projects for building earthen berms that temporarily store large amounts of stormwater and snowmelt. This would continue the past five years of progress made by CRWD under its CIP initiative in collaboration with The Hormel Foundation and State of Minnesota.

CRWD Administrator Justin Hanson expressed gratitude for the legislative efforts by outgoing state Sen. Dan Sparks and Rep. Jeanne Poppe, both of Austin, to support CRWD’s projects this year and during their many years serving in the Legislature.

CRWD’s initial five-year goal for its CIP initiative was achieved in 2020 thanks to the original $3.2 million grant from The Hormel Foundation and another $3.4 million in state and local funding that built 14 projects, including 11 upland-storage structures in the Dobbins watershed. Most projects were built on streams flowing into Dobbins’ north and south branches.

This year, CRWD has surpassed its original CIP goal of 8 percent by achieving at least a 10-percent peak flow reduction at the Cedar-Dobbins confluence in Austin after constructing this summer the district’s biggest project to date – Dexter 30-Dam 2. Spanning nearly 2,000 feet long with a 21-foot peak berm height, the $1.2 million structure is fully functional for temporary stormwater storage in the headwaters of Dobbins’ south branch.

Nearly 3,000 acres of mostly cropland now are controlled by CIP projects in the Dobbins watershed that is prone to flash flooding. With all CIP projects in place, a 10-year rain storm (roughly 4 inches of rain) – which leads to some rural roads being overtopped by flooding – would be about 1 foot lower at its peak downstream from Dobbins Creek’s confluence of its north and south branches in Austin’s Jay C. Hormel Nature Center.

Part of the next CIP work in 2021 will be funded by $100,000 in state funding under the first budget for the Cedar-Wapsipinicon Comprehensive Water-Management Plan. This is part of the “One Watershed, One Plan” funding from the Minnesota Board of Water & Soil Resources (BWSR).