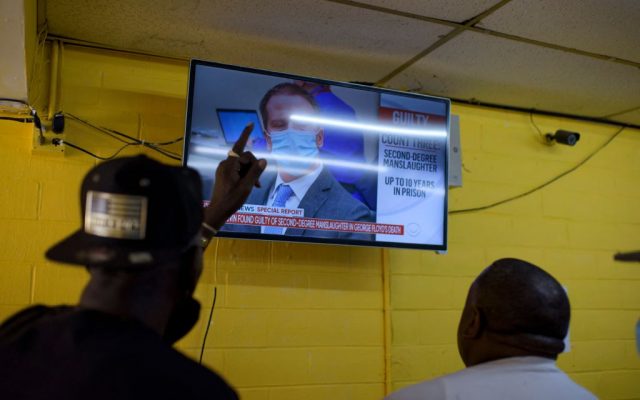 People inside the Twees Foods Store in the Third Ward where George Floyd grew up in Houston, Texas, react at the verdict in Derek Chauvin's trial on April 20, 2021. - Sacked police officer Derek Chauvin was convicted of murder and manslaughter on april 20 in the death of African-American George Floyd in a case that roiled the United States for almost a year, laying bare deep racial divisions. (Photo by Mark Felix / AFP) (Photo by MARK FELIX/AFP via Getty Images)

Former Minneapolis Police Officer Derek Chauvin has been found guilty of two counts of murder and one count of manslaughter in his involvement in the death of George Floyd.

Floyd, 46, died during the arrest last May.

The jury deliberated for a little more than 10 hours prior to reaching its verdict on Tuesday.

This is a developing story…