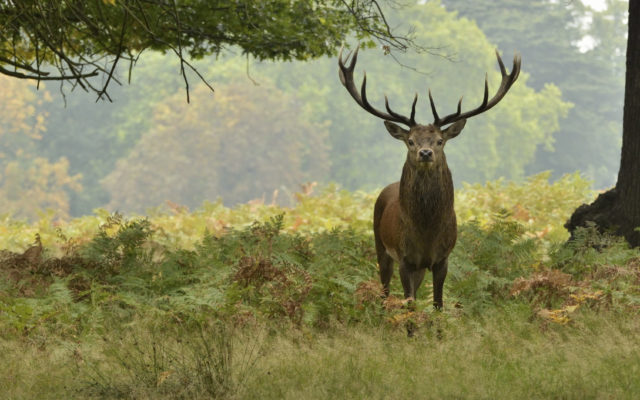 A Red Deer Stag walking into the woods.

Following the discovery of chronic wasting disease in a wild deer in Dakota County in March, the Minnesota Department of Natural Resources will expand current deer feeding and attractant bans to include Dakota, Hennepin, Ramsey, Rice, Scott and Washington counties beginning July 1.

“To prevent the spread of chronic wasting disease, it’s important to limit close contact among deer,” said Michelle Carstensen, DNR’s wildlife health program supervisor. “By keeping feed and attractants out of our backyards, Minnesotans can discourage the congregation of deer that spreads this deadly disease.”

In counties where deer feeding is banned, people need to remove any grains, fruits, nuts and other food placed in ways that could entice deer. People who feed birds or small mammals need to make sure that deer cannot access the food. The feed should be kept at least 6 feet above ground level. Normal agricultural, forest management or wildlife food-planting practices are allowed.

In areas where the attractant ban is also in place, people must remove any liquid food scents, salt, minerals and other natural or manufactured products that attract deer.

Additional CWD information
CWD is an always-fatal neurological disease that affects the cervid family, which includes deer, elk and moose. Since CWD was first detected in a captive elk in Minnesota in 2002, the DNR has tested more than 90,000 wild deer. To date, 88 wild deer have been confirmed positive for CWD in Minnesota. Test results, including locations of confirmed positive test results and statistics, are available on the DNR CWD webpage.

Keeping Minnesota’s wild deer population healthy remains the goal of the DNR’s response to CWD. The DNR’s three-pronged approach to prevent the spread of the disease was detailed in an earlier news release. The agency’s CWD response plan can be found on the DNR website.

*As previously announced, starting July 1 the DNR will remove the feeding ban from Kandiyohi, McLeod, Meeker, Renville and Wright counties, as CWD was not detected in any wild deer for the third-consecutive year of wild deer disease testing in central Minnesota.

Find more information on feeding and attractant bans on the DNR website.