A Brownsdale man with a warrant out for his arrest who was brought into custody after a traffic stop in rural Mower County on December 26th is facing felony firearm and drug possession charges in Mower County District Court after a search of the vehicle he was a passenger in and a search of his residence on December 31st. 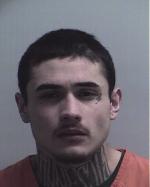 24-year old Ezra Robert Hardy was charged Wednesday with felonies for being a violent felon in possession of a firearm, being a violent felon in possession of firearm ammunition and fifth-degree drug possession and a petty misdemeanor for possession of drug paraphernalia after authorities found a plastic bag containing approximately one gram of methamphetamine, two methamphetamine pipes, a scale with methamphetamine residue, a marijuana pipe an a marijuana grinder with marijuana residue after a search of the vehicle in which he was a passenger in Red Rock Township on the evening of December 26th.  Authorities executed a search warrant on Hardy’s residence on December 31st and found a .38 caliber revolver loaded with six rounds of ammunition.

Hardy’s next appearance in Mower County District Court is scheduled for January 16th.