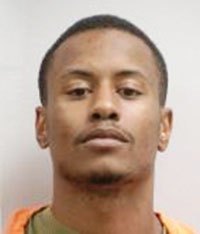 An Austin man who was wanted on a felony murder charge after a homicide at a northwest Austin residence early on the morning of July 31st has been taken into custody.

The Austin Police Department reported on their Facebook page Friday afternoon that 27-year old Me’Darian Ledale McGruder had been taken into custody.  Chief of Police Dave McKichan previously reported that a complaint warrant for a felony charge of 2nd degree murder had been issued for McGruder in relation to the homicide that occured early on the morning of Saturday, July 31st  inside a residence on the 100 block of 10th St. NW.

Austin Police officers responded to a 9-1-1 call shortly before 2 a.m. that morning concerning a woman who had been shot inside the residence, and responding officers and EMS personnel provided aid to the woman at the scene, who was later identified as 20-year old Tyesha Tahne Gills of Austin.  Authorities reported that Gills was then transported to Mayo Clinic Health Systems in Austin, where she later died.