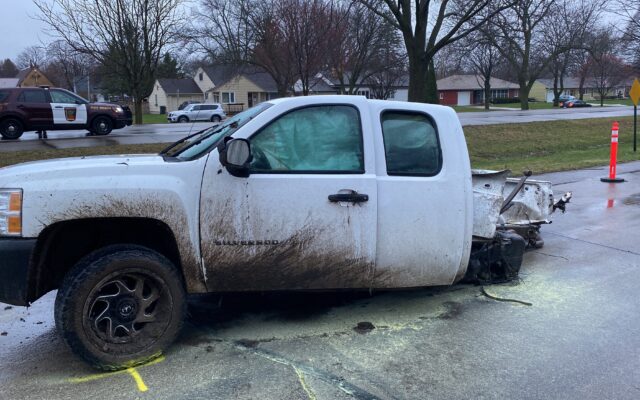 An Austin man suspected for driving under the influence was taken into custody Monday morning after a pickup he was driving was destroyed in an accident after a high-speed chase on West Oakland Avenue early Sunday morning.

An Austin Police officer attempted to stop a Chevy Silverado pickup for several traffic violations in the 500 block of West Oakland Avenue at approximately 3:20 a.m. Sunday morning.  The driver did not stop for the officer’s lights and sirens, and after briefly accelerating to 50-55 mph, Austin Chief of Police Dave McKichan reported that the suspect vehicle then began reaching speeds estimated by the officer to be above 70 mph.

The driver of the pickup truck lost control of the vehicle as it entered the 1600 block of West Oakland Avenue, and Chief McKichan stated that the vehicle appeared headed into the south ditch toward Banfield Elementary School. The driver overcorrected and exited the roadway via the north ditch, striking a tree as it left the roadway.  McKichan noted that the impact was such that it sheared most of the rear of the truck off. The truck ended up on the parallel frontage road facing the opposite direction of the way it had been traveling, and McKichan reported that the truck and the path it had traveled burst into flames.  Officers were not able to see anyone inside the vehicle at that point, and Chief McKichan stated that they momentarily looked around the area, believing the driver may have been ejected. When the flames subsided somewhat, officers approached the vehicle and while unable to open the driver’s door due to the damage to it, McKichan stated that they were able to see the driver facedown under the passenger side dashboard. They were able to remove him from the still-burning vehicle via the passenger side door. Once at a safe distance, Chief McKichan stated that they then began medical care. Another arriving officer knocked down the remaining flames with a fire-extinguisher, and Austin Fire and Mayo Ambulance then arrived to assist. The driver, who was the sole occupant of the vehicle, was transported to Mayo Clinic Health Systems in Austin for treatment.

Due to indications that the driver may have been impaired by alcohol, McKichan stated that a search warrant was applied for and a blood draw taken. A Minnesota State Patrol Crash Reconstructionist also responded to the scene, and while following up on the case during the morning of May 2nd, Chief McKichan indicated that officers made contact with the driver of the vehicle, 23-year old Melchor Barnabas of Austin, who was at home as he had been released from medical care. Barnabas was arrested at that time and taken to the Mower County jail where the case will be reviewed by the Mower County Attorney’s Office for charging purposes.

Chief McKichan stated that the incident was one of seven suspected driving under the influence cases the Austin Police Department handled in a roughly 29 hour period from 11pm on Friday April 29th to 3:20am Sunday morning May 1st.