An Austin man accused of severely beating someone in the head with a gun in February has been sentenced to prison time in Mower County District Court. 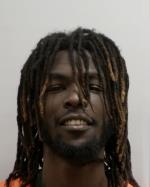 21-year old Cham Nygare Gilo has pleaded guilty to felony charges of 1st degree burglary-assault and illegal possession of a firearm. As part of a plea agreement, charges of 2nd degree attempted murder and 2nd degree assault have been dismissed.

Gilo was arrested on February 16 after a report of a shooting in the 100 block of 13th Street NE in Austin.  Austin Police indicated that a 35-year-old victim told them a masked man had entered his home and shot him in the head. Officers stated that the victim’s injuries were consistent with being struck in the head with a gun.

Authorities then located Gilo in the area a short time later and arrested him.

Gilo was sentenced Wednesday to seven years and four months in prison, with credit for 248 days already served.