An Austin man who shot another man with a BB gun when he attempted to purchase marijuana with a counterfeit $100 bill in the Walmart parking lot on the evening of Monday, March 4th, 2019 has been sentenced to supervised probation and a fine in Mower County District Court. 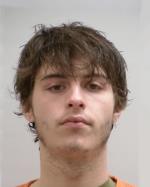 Rowe pleaded guilty to a charge of 2nd degree assault for his role in the incident where authorities reported that a fight broke out during a drug deal and Rowe shot a man several times with a BB gun.