An Austin man involved in a drive-by shooting in June has been sentenced to prison time in Mower County District Court. 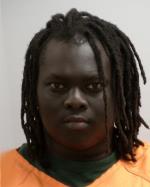 21-year old Manamany Omot Abella was sentenced Thursday to five years in prison, with credit for 59 days already served.  Abella pleaded guilty to a felony charge of being a violent felon in possession of a firearm for an incident early on the morning of June 22. Felony charges of 2nd degree assault and drive-by shooting were dismissed as part of a plea agreement in the case.

Austin Police reported that Abella was involved in an incident where shots were fired at an apartment building in the 300 block of South Main Street. No one was injured. Officers found four live rounds and two S&W .40 caliber shell casings in the area.