An Austin man who allegedly tried to solicit sex from a 13-year-old girl in late December of 2018 has been charged with two felonies in Mower County District Court. 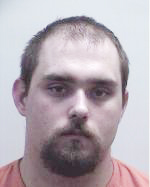