An Austin man is facing four felony charges in Mower County District Court after an incident at an Austin apartment complex late Wednesday evening where he allegedly entered an apartment without permission, assaulted a female resident of the unit and threatened to take her hostage, and reportedly kicked a police officer while being apprehended. 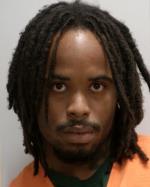 Officers from the Austin Police Department responded to several 911 calls at approximately 10:08 p.m. Wednesday evening from the Twin Towers Apartments at 200 1st Avenue NE.  An officer went to the lobby and soon heard a male and female screaming from a unit near the laundry room area. That officer attempted to open the door to that unit and the door was immediately forced shut onto the officer.  Chief of Police Dave McKichan reported that the officer was able to enter the apartment when another officer arrived, and they observed that a male subject, later identified as 24-year old Jordan Tashawn Travis, was attempting to keep officers from entering and an elderly female was on the floor of the living room.

McKichan stated that Travis was ordered by officers to get on the floor, but he resisted and appeared to be highly agitated and paranoid as he yelled at officers.  A taser had to be used to aid in the arrest of Travis, and Chief McKichan stated that while an officer was reportedly kicked by Travis, they were able to get control of him and handcuffed him. Travis indicated to the officers that he had consumed two pills of an undisclosed substance, and due to that admission, combined with the other indicators of potentially being under the influence of an unknown substance, McKichan stated that Travis was transported via ambulance to Mayo Clinic Health Systems of Austin, medically cleared, and then was taken to the Mower County jail.

Officers spoke with the female, who reported that she did not know Travis, and she added that he had entered her residence uninvited through the back door.  The victim stated that a short time later, Travis grabbed her by the throat and pushed her onto the floor.  Chief McKichan stated that when the victim asked Travis to leave, he allegedly threatened to keep her as a hostage.  He added that the victim declined medical attention, and the case was forwarded to the Mower County Attorney’s Office for review.

Travis is facing felony charges of 1st degree burglary, assault on a person in a building or on property, kidnapping, 1st degree burglary of an occupied dwelling and interference with an emergency telephone call.  Travis is also facing gross misdemeanor charges of 4th degree assault of a peace officer and for obstructing the legal process, and he is also facing a misdemeanor charge of 5th degree assault.