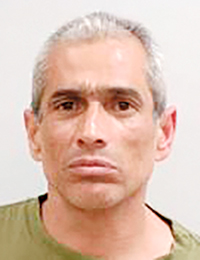 An Austin man is in custody facing multiple charges after leading authorities on a vehicle chase through two counties late Sunday afternoon.

Mower County Sheriff Steve Sandvik reported that a 9-1-1 call was received late Sunday afternoon concerning 48-year old Reuben Trevino of Austin, as authorities were told that he was under the influence of a controlled substance and should not be driving.  Trevino had left the residence where the call originated from and was located by Mower County dispatch after pinging his phone in the vicinity of U.S. Highway 218 and 270th Street north of Austin. Sheriff Sandvik stated that the Minnesota State Patrol made a traffic stop at 320th Street, and Trevino got out of the vehicle, but then got back in and started  driving away from the scene.

Mower County Sheriff’s Deputies joined in the pursuit soon afterwards and chased the vehicle to Highway 56, where it started traveling southbound.  Sandvik stated that a deputy had stop sticks deployed at the intersection of County Road 57 and Highway 56, but Trevino noticed the deputy, turned around and headed back north.  Trevino kept traveling north on Highway 56 into Dodge County and a second set of stop sticks were deployed just south of the intersection of Highways 56 and 30. Sheriff Sandvik went on to report that before Trevino struck them he stopped, put his arms in the air and surrendered.

Trevino was taken to the Mower County jail, and he has been charged with felonies for fleeing a peace officer in a motor vehicle, 1st degree DWI, driving while impairied and operating a motor vehicle while under the influence of a controlled substance.  He has also been charged with a gross misdemeanor for driving after cancellation, inimical to public safety, and with petty misdemeanors for possession of drug paraphernalia and for possession of a small amount of marijuana.