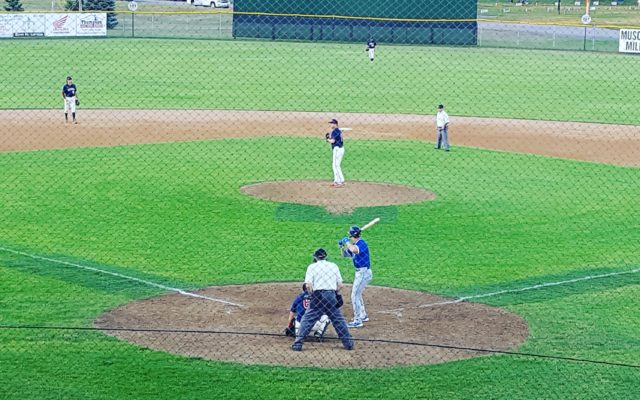 The Austin Greyhounds played host to the Class B Rochester Royals out of the Classic Cannon Valley League in a non-league game at Marcusen Park Wednesday evening, and two-run homers from third baseman Gabe Sepulveda and catcher Logan Milene, plus a strong start on the mound from lefthander Matteo Finocchi helped to lift the Royals past the Hounds 11-6.

Finocchi retired the first nine batters he faced before issuing a walk to Hounds left fielder Alex Ciola in the bottom of the fourth, and he then did not allow another runner until second baseman Jack Dankert picked up the first Austin hit in the bottom of the sixth.  The Hounds wound up loading the bases with two outs in the inning with the single by Dankert and two walks, but Finocchi induced a grounder to third for a force out to end the threat.  Finocchi, who earned the win gave up just the one hit in six innings of work, striking out seven and walking three.

The Royals, who belted out 16 hits in the game, nine of them for extra bases led 9-0 heading into the bottom of the eighth when Zach Bollingberg, who came into the game to play second base was hit by a pitch from reliever Luca Cardenas to lead off the inning.  Third baseman Drew Copley then hit into a fielder’s choice, but Bollingberg went all the way to third on an errant throw to second base.  After the Hounds loaded the bases, Bollingberg scored on a passed ball to cut the Royals lead to 9-1.  After a walk to catcher Eric Torres refilled the bases, Jed Nelson, who came into the game in center field belted a two-run single to make the score 9-3, and Torres wound up coming across the plate on a wild pitch to cut the Royals lead to 9-4.  Rochester tallied two more runs in the top of the 9th to increase their lead to 11-4, but Copley belted a two-run homer over the left centerfield fence to make the final 11-6.

With the loss, the Greyhounds drop to 2-3 on the season.  The Hounds will have the 4th of July weekend off before returning to action against the Twin Rivers League leading Rochester Roadrunners in Rochester on July 7th.  The next home game for Austin will be on July 9th versus the Pine Island Pioneers at 7:30 p.m.