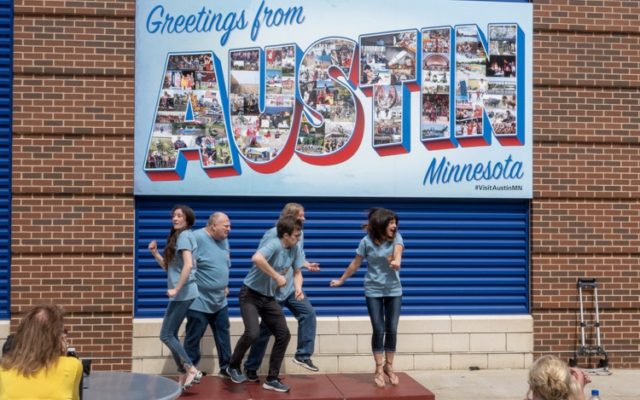 The Austin ArtWorks Festival, a two-day celebration of the visual, performing and literary arts, marks its 10th anniversary year with Featured Artist Leslie Barlow and Chastity Brown with EmiSunshine performing at the Schindler Celebration show. Thousands of visitors are expected in Downtown Austin on Saturday, August 28 and Sunday, August 29, 2021.

Leslie Barlow is an artist living and working on occupied Očeti Šakówin and Wahpekute land now known as Minneapolis, MN. Barlow is interested in reimagining our relationship to our racial identities through healing our collective understanding of belonging and what it means to be family. Her life-size oil paintings explore how race entangles the intimate sphere of love, family, and friendship.

Barlow’s artwork can be found at the Minnesota Museum of American Art, the Weisman Art Museum, Anoka-Ramsey Community College, the Hennepin County Medical Center, and the US Bank Stadium.

Barlow is part of the collective Creatives After Curfew, creating public art in solidarity with the uprising to end systemic racism and create public safety systems that keep all people safe. Leslie Barlow is currently represented by Bockley Gallery. Barlow’s work will be exhibited at the Austin ArtWorks Center 2nd Floor Gallery during the Austin ArtWorks Festival and the artists will be present to greet visitors.

Chastity Brown with EmiSunshine will take the stage of the Paramount Theatre for the 6th Annual Schindler Celebration on Saturday, August 28. The 7 p.m. concert is the centerpiece of the Austin ArtWorks Festival and is sponsored by Mayo Clinic Health System. Tickets will be posted for sale in August.

Chastity Brown is a Minneapolis-based singer-songwriter whom critics have dubbed “a rocking, rolling encyclopedia of roots music.” Raised in Union City, Tennessee, Brown grew up playing the saxophone and drums in church. Her most recent release, Silhouette of Sirens, was chosen as an NPR “First Listen” and she’s often featured on MPR The Current.

EmiSunshine, a recent contestant on ABC’s American Idol, will open for Brown. Sunshine debuted on the Grand Ole Opry stage in 2014 at the age of 10 and has been garnering national attention ever since. Now 16, her country music with influences of Americana, bluegrass, blues and gospel keeps her performing about 150 times each year.