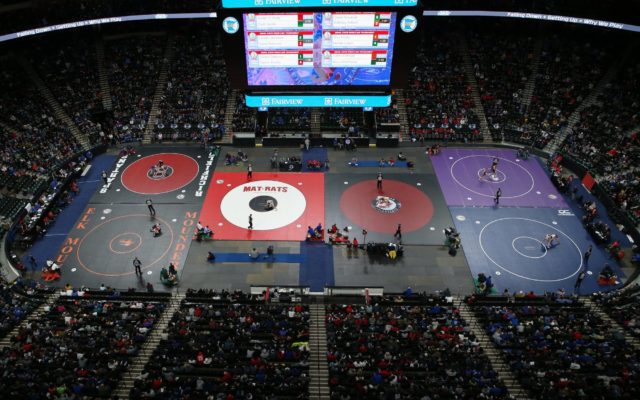 Area wrestlers brought home a state title, a runner-up and a 4th place finish from the Minnesota State Class A Individual Wrestling Tourmanent Saturday at the Xcel Energy Center in downtown St. Paul.

Westfield Razorbacks (Hayfield/Blooming Prairie) senior Colton Krell won his second state title  Class A championship at 195-pounds Saturday as he finished with a record of 33-3 overall by pinning previously unbeaten Tyler VanLuik of Minnewaska Area in the final match.  Krell defeated Josh Steffen of Canby with a 16-1 technichal fall in the semifinals.  Razorback senior heavyweight Dylan Nirk took fourth place in his third state meet appearance as he defeated Alec Francis of Caledonia/Houston 3-1 in the third round of the wrestlebacks before falling to Cian Buehler of Ottertail Central 3-0 in the third place match.

Anthony Romero of GMLOS took second at 106 pounds. He defeated Javon Williams of Atwater/Cosmos/Grove City 10-0 in the semifinals, but was pinned at :30 seconds of the first period in the championship match by Walker Bents of Belgrade/Brooten/Elrosa.

Daniel Smith took sixth place at 160 for GMLOS after being pinned in the 5th place match by Josiah Hendensten of Medford and Noah Sayles took fifth at 170 for the Bulldogs by defeating Ashton Hanan of Kimball Area by the score of 5-3.